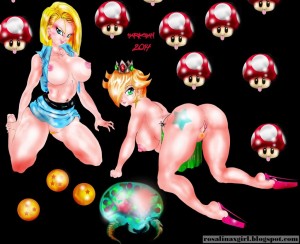 Back from a “family week-end”, I was really nice but without internet it’s so calm on evening, nothing to do instead of going to sleep, so boring. Also in France when you don’t leave on Paris it’s dead on Sunday do must admit it was kinda boring but I’m back).

Also don’t forget about the Rosalina’s Delivery Service comic (here). It was suggested to make the full comic comic for free but in a small version but wont happen, not fair for people who bought it. And will have to make a censored version for japanese site but the one here is fully uncensored… Oh yeah… ^^

Today one of my favorite character is back with Rosalina (btw, most of my fav are blonde but not all :p). This really sexy as original illustration was made by Harkhan, I agree he have a really surprising and curious style but it’s interesting. Also, each artists have his own style so as if everybody drew Rosalina she always look different, that’s more fun in that way and Harkhan‘s version is gorgeous… °w°

When I saw Harkhan’s gallery (here) for the first time, for sure it was really surprising but the think who picked my interest at start was the way he drew high heels. Lingerie and high heels are soo sexy, clothes add a magical touch to a woman and I really wanted Harkhan to draw Rosalina and see how she look with his style. So powerfull he accepted and he really picked a powerfull girl to be with her… Love it… (^o^)/

Once again thanks so much for your kindness Harkhan, Love that sexy Rosalina as if the only error is go give her green eyes instead of blue but that’s a small error compared to other artists for generally reverse her hair style and draw the hair lock in front of her left eye instead of the right (as if sometimes there is no choice to cheat due to Rosalina pose). Also guys feel free to take a look to Harkhan‘s gallery for more sexy ladies and illustrations, already more than 60 illustration you can’t miss… ~__^

One year ago: Original – Kadie
Next to come: New (electric) pokemon will come