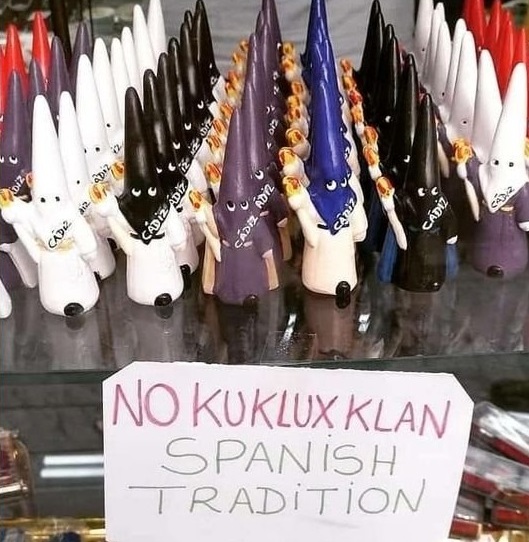 Of course it’s time to wish you wonderfull Easter being fun, tasty and even kinky, and a hug to all my Spanish friends that have really boring and annoying tradition their side with the saint week. Photo on the left is sure humorous but you can see it’s quite another spirit than our tasty eggs and cute bunnies… ^^’
Talking about Easter, In France we have Monday off to celebrate it and I though we were lucky until know English people get both Friday and Sunday off. Anyway considering U.S. people have no day off it’s still nice and also makes me curious. How you guys celebrate Easter your side? Would be interesting see the difference between each countries °o°

At first I received the sketchy animation you can see on the left as birthday gift and the-4got10-one promised me to finish it a day, anyway I already received some great illustration as gift from him and I know the insane work behind and illustration so it sounded too much (anyway I sure was so amazed and honored by this gift). Finally I told the-4got10-one I’ll go for a proper commission to finish this illustration at its right and fair price even if it would be pain for the budget. As you can see it was pretty much expensive considering my actual budget but I wanted keep my promise and the final piece really worth it… Oh yeah… \(^o^)/

Working on the illustration, the animation move was already set from the beginning and there was just two edits made during the process, first one was on the breast move and you can see the second version the-4got10-one sent me on the left.The bouncing is still a bit off in my opinion but manage anatomy in animation is not easy task and at some point the exaggerated bouncing make it even more sexy. The second edit was a little mistake that the-4got10-one noticed in time just before start coloring telling me “I was about to color it but then I realized that I forgot to give her the bunny ears“, I feel stupid I missed it my side but no doubt we now have a perfect princess bunny ready for the show… ^__^
I really love the result, the-4got10-one made a really sexy and well made animation, breasts bouncing is quite a challenge but the result is pretty smooth and mixing cuteness and sexiness in so nicely way… Also I told the-4got10-one there was no need to rush or deadline but managed one his time being used to having time limits and was got time since we finally get it in time for Easter. Also the-4got10-one get his inspiration from the artist Diives that is quiet an amazing reference so if he keep practice that way no doubt epic stuff is coming… °w°
My only regret is the-4got10-one posted on D.A. without watermark saying “I want others to see all of Rosalina” so it make my efforts promote my page totally useless side since people will just go share his version without watermark and I lost a powerful way to advertise my project with this animation. Also as you can imagine animated stuff need a lot of work so are also more pricey and made a nice hole in my budget, I was so happy get an amazing animation to promote my page and finally get it’s power lost. Also ironically I decided to get the second version with background to be patreon only to get a chance compensate this mistake but I feel being forcefull putting Rosalina art being a paywall and I totally don’t like that feeling… Bwaaaa… T_T