Thanks to Merethide and all that bought the last Rosalina’s Delivery Service comic. Due to the quality and artist price it still haven’t finished to found itself, already have some ideas in mind for another chapter but I’ll need your support to make it happen. Feel free to get your copy here guys… Oh yeah… ^^
Was at a cosplay shooting to make some series with Rosalina tennis cosplay, some really cool and other a bit funny especially when Tom Sawyer started to fish some princess things but it ended with my racket in his face… Eh eh.

Was long time my friend DigitallyDeviant had to wait but it will be 3 illustrations by him in a row on this Overwatch series. Starting today with Mercy using her secret healing ability on Rosalina. Not sure that cute princess was really in need no doubt she enjoyed that tasty proteined drink. Compared to Samus illustration (see it her), there is still a normal and trap version for Rosalina but DigitallyDeviant drew Mercy as futa in both case cause the illustration was oriented on the messy side, no clean version available and planned… °w° 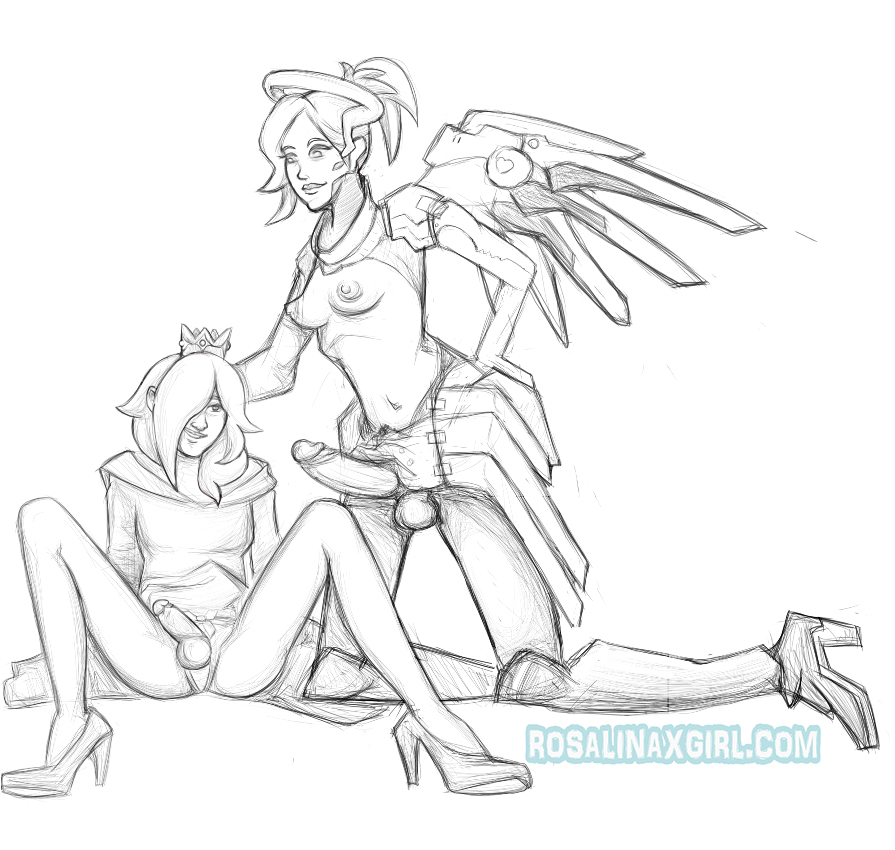 According my deal with DigitallyDeviant, I first was his model with my Rosalina cosplay (then you wont see the original photo series) and he used his fav as reference for this illustration, at this time the trap version id the original and there is a female alternative to suit more to the true wonderfull Rosalina. As for Mercy it’s DigitallyDeviant that chosen to pick her for that hot duo.
Was close to forget that it’s the 2nd time I get Mercy from my project, You can see the trio with Mercy and Mei here but this time DigitallyDeviant gave us a clothed Mercy with little bonus. One more intense the other juicy but both so kinky and exciting then looking at the other, I must ask DigitallyDeviant Rosalina with those star heels. °w°
Mercy was the more complicated to draw for DigitallyDeviant, not just because of the wings but also since no references for the pose compared as Rosalina but she was perfect at the first time. The only edit if you looks at the sketch was for Rosalina hand but be sure this illustration was hours of work and always feel so honored when artist accept to participate and put so much efforts on my project. No more I can say cause there is many secrets behind this illustration, anyway I hope you like it and stay tuned for newt Overwatch piece, two more to come.

One year ago: #548 – WONDERFULL Vintage pin-up promotion
Next to come: Zarya keep it rough and hard (NSFW)