Weird things happen with google adsense on the SFW site, most warning about content that don’t respect their rules is about on url that no one can normally reach and I don’t understand how google bot do it… Also tried clean the website for re-examination then noticed warnings disappear with time so I guess it’s fine as long I see the ads. ^^
Also the delay between patreon bonus preview and the release of the final version is pretty wort lately, just I must admit I didn’t expected post so much from Lunakiri on a row but true exclusivity are back soon.. °w° 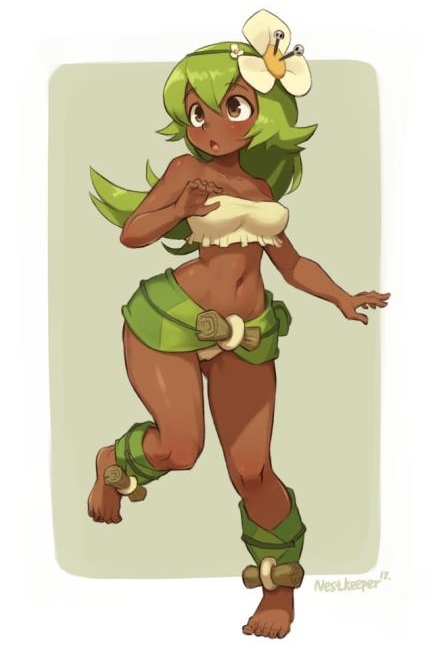 Here come a commissioned illustration where I told Lunakiri got totally freedom for pose and character choice, can sounds weird since I already something crazy in mind for every commissions but she drew a lot Rosalina lately so a little freedom sounded fair (and still allow a new Rosalina). Lunakiri anyway was really kind and picked a lady for the wishlist going to pair Rosalina with Amalia Sheran Sharm from Wakfu with a design I didn’t knew about here… °o°
I got a few wips from Lunakiri but was impossible find who was the character until she finally gave me the answer, I only knew Amalia with long hair on her back like Rosalina but never with a ponytail, you can see both version on the left and right illustrations if you are curious. Other details about Amalia choice for this piece, the reason Lunakiri picked her was “she got a darker skin tone […] for contract to Rosa’s light skin“… That’s really smart idea, isn’t it? 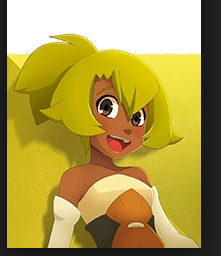 I really love this illustration with both strong romance and naughty side, You start with the pose itself and romantic kissing then moving more sexy starting with the high heels shoes (Rosalina one are so cool) and no way miss those vibrator and juicy part, Lunakiri really know me too well. As you can see the toy on Rosalina looks more thin in the final version than the sketch where I though it was a two wires for a double egg vibrator with one going in the ass and other in pussy, Lunakiri made it more intense then an egg vibrator for sure but kinda liked the idea of a double toy on Rosalina too… ^^’
So how about the title, due to Rosalina pose Lunakiri decided spread the hair lock to not have the face hidden, she offered edit the piece and flip it at the end then I told her to keep it that way, of course for me the true Rosalina is important and I hair lock that way still bug me (I prefer way more have spread working on legs on pussy part); anyway this piece had something interesting and I wanted to keep the idea. At some points it looks realistic that way cause can’t have a perfect lock and I have the same thing happening with my wig then do Rosalina cosplay, Some artist draw Rosalina with hair lock on wrong side or a ponytail, now with Lunakiri help I have the first Rosalina with lock spreading that way ever… XD
While working on this duo, Lunakiri told me “I’m not doing the earrings gold […] because it will be lost in all her yellow hair“. On the previous illustration with Twintelle from arms (you can see on the left) she also goes that way. I offered freedom for this illustration to Lunakiri so I accepted let her goes with Silver earrings ans there is another illustration coming with silver earrings again but thinking at it I must ask to get back to gold. I know Lunakiri‘s idea is great on both visual and artistic side but I prefer keep them like the true Rosalina colour, I agree I often ask for crazy situations or outfits far to the real Rosalina spirit but there is parts I want to be like the true Rosalina I fallen in love 11 years ago… °w° 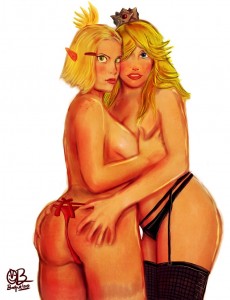 I say it a long time I haven’t post in the blog but there is some drawings waitings, so it’s restart… Enjoy… Now there more than 8.000 pageviews in the blog, really nice thing, but just 2 comments and 4 followers (2 for me and 2 friends) not good… T_T 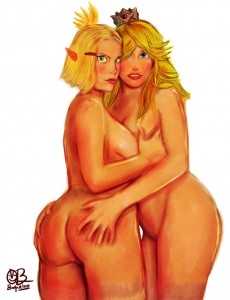 So about this drawing don’t say if a lot know this serie made in france but I’m happy to present you Evangeline, one of the more famous and beautifull character in this serie… And Evangeline the representation of a chef designer, know a little about her an his family but that’s my secret…This time it wasn’t a request but a D.A. commission… So with result like this, it was a really nice idea to ask this request… So there is the naked version… Enjoy… ;p

So this beautifull drawing was a commission by Berserk-XXX a nice artist I found on hf but the final drawing is on his deviantart account, that’s why I linj this… The two girls are really awesome, especialy Rosalina (what Else), and there is some people who say they look “fat”… So it’s the question on the day “fat or not, what your opinion… ^^”