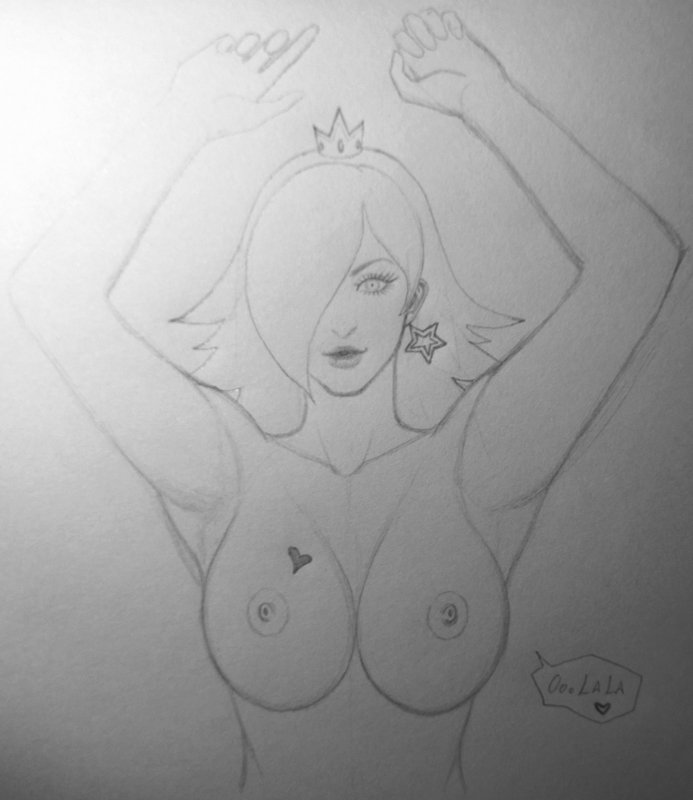 Like Twitter, it seem someone tried to connect to my account, already was hacked once and it ended we more than 10.000 followed (just imagine I had to remove them one by one). No troubles this time, that’s twitter for his warning but it remember me that I don’t publish so much on this place. Do you think I must be active or people don’t care?
Also must update the curriculum page and add Mario party 10, announced and available since a few weeks but wanted to try it at start to know what we can do with Rosalina. Can play her as normal character, amiibo and there is a photo shooting bonus, spent hours on it (really) but they gave cool and so adorables moves… Awww… °w° 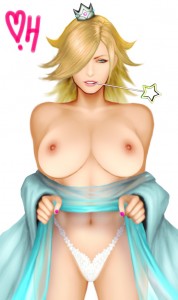 After an amazing and wonderfull illustration from Untitled that you can see on the right, I finally get a new Rosalina from him with a sketch request raffle he made on HentaiFoundry. I agree it’s not the same thing as his previous Rosalina but you can’t imagine how Untitled is amazing and talented but don’t do commissions or “don’t take direct requests but I would be picking up on things in your comments that inspire me“. You can be sure his first Rosalina piece was a powerfull honor and I wont a sketch at his raffle… How powerfull… \(^o^)/
Like rafle rules, we were able to give a brief description (portrait/Pin-Up/ Soft/Hardcore Scene), where to focus , mood, expression… I must admit I don’t remember what I asked to Untitled. Though, be sure I suggested Rosalina and also didn’t asked for hardcore piece cause didn’t want a man with her. In fact Untitled said it’s “one character request only” so no chance it happen… I feel so stupid… XD
Sketchy for sure but Untitled made Rosalina soo sexy. Thoe breasts must feel so soft and with the “OooLaLa” we can imagine so much things happening so depending of your imagination can be fun or kinda exciting. Untitled did a great job, just told him that Rosalina’s crown a little too small. Some artist make it bigger or with a special form to add a dynamic touch but don’t feel her really nice on that way. At last she’s still so beautifull and sexy, Oh yeah…
Thanks so much for this new Rosalina piece Untitled and if you guys want more, you can see his amazing gallerie ower HentaiFoundry (here) and for other illustrations he did with this raffle, they are on his Tumblr (here), also some really cool bonus on this place like an animated Jill from R.E., don’t hesitate to take a look you will be amazed (and excited) for sure.

One year ago: Metroid – Samus N°9
Next to come: Cowgirl meet tentacles

There is a lot of artists who look really interesting with my project and say they will be happy drawn Rosalina for my blog, thanks so much all and sometimes when I see the final drawing it’s “OMG… That’s so beautifull…” and it was exactly what I think when I see this pic. When I see Untitled gallerie (yeah, it’s his name in hf), I ask him if he can drawn Rosalina and when he say “I’m not doing any commission work but will just sketch around” I was sure the picture can be really nice… But something so beautifull like that… It’s just so nice… Thanks so much for your kindness Untitled… (^o^)/

All in this drawing is incredible, Rosalina face with the wand from her mouth (Untitled proposed to remove it, I answer Rosalina have this hair style, blue hair, crowm and this star wand so he can’t delete this…). Nipples are incredibly beautifull and sexy too and for clothes, a transparent dress and a nice view to Rosalina’s pantie… It’s a dream… I’m in love with the original Rosalina from Nintendo and this one look so beautifull, sexy… She’s perfect and alone (hum…). Love this drawing… XD

so guys, I’m sure I’m not the only who love thic pic so if you want more, don”t hesitate to tahe a look to Untitled gallerie. He have an awesome gallerie and a little vote who must be really interesting (here)… Hope to see you post a comment… Thanks in advance guys and see you in the blog (maybe with a little comment ;p)… ^^