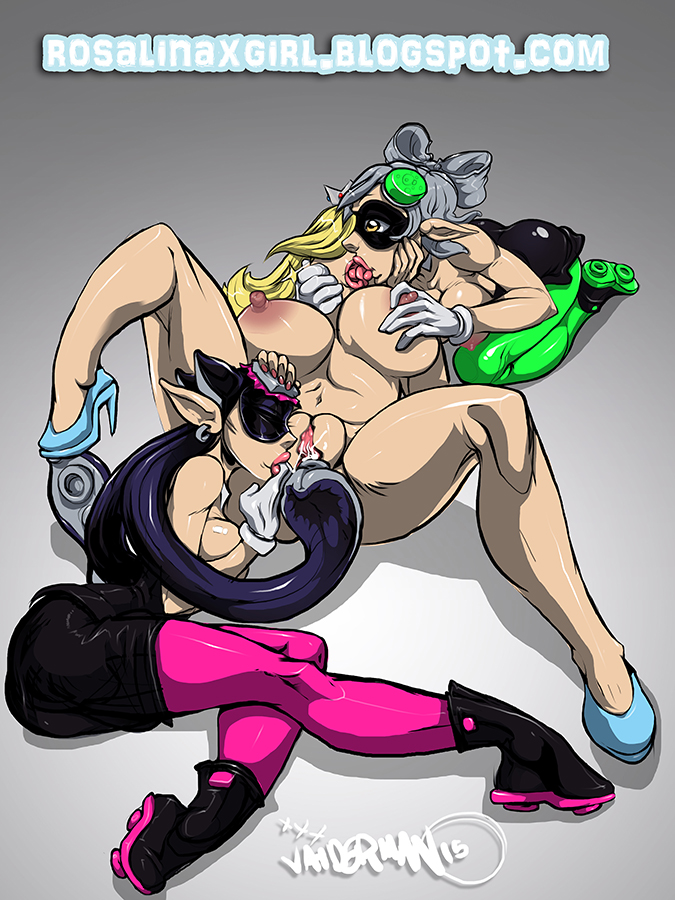 Talked with Ska about some idea I had for the next chapter of Rosalina’s Delivery Service and after some edits he have now the final version of the script. I’m happy how the story turned but I still can imagine and describe the hottest scene, no trouble to imagine what happen before and after sex though… Must write childre books if I wasn’t so pervert… XD
Also learned that I must be careful with YCH auction, I won one bondage pin-up that I really wanted cause the pose is gorgeous but like artist pricelist, for the same price I was able to get a duo… So stupid… T_T

On May 29th, the game Splatoon is officilay available on WiiU, like the huge promotion Nintendo made and all naughty fanarts on the web I’m sure you already heard and maybe know about this game. I also really wanted to have something with Rosalina and it’s xxxbattery who accepted this challenge and made a wonderfull illustration. He really have an amazing realistic style so was sure he wont be confident with Splatoon characters design (also must pair them with Rosalina) butxxxbattery answered “Splatoon sounds awesome” and you can imagine what happened next. I hope you like the result guys.
Those two ladies playing with Rosalina body are squid sisters singers (and fighters), named Callie for purple one and Maris for green one (also know as Aori and Hotaru in Japan). They appeared during the Nintendo direct about Splatoon for a short time but until I get the game, can’t tell what they will do in but at last you can be sure they get so much fanarts due to her crazy and original design. At first wanted a true fighter and messy piece from xxxbattery but a little kinky trio with Rosalina, Callie and Marie sounds so powerfull… Also for messy touch, xxxbattery drew already some fluid and there will be much more once they will make Rosalina cum… °w°
Callie and Marie design is fun, both are nice suits but my favorite detain are those crazy hats, a reversed slice of bread for Marie and a bowl (like the one to get food to dog) for Callie, btw xxxbattery made an error on this one and drew it like a normal hat instead of a bowl. I wasn’t able to be here during the livestream for a moment and missed the line of this part so was to late to ask for a change but it’s not xxxbattery fault and for the rest she’s perfect.
xxxbattery said he think to make a speedpainting of this illustration so stay turned if there is more to come and if you want more from this incredible artists you can find him on so much places like HentaiFoundry, Tumblr, Twitter, Instagram, he also do livestreams on Picarto and will open soon his own websitexxxbattery.com. So much places to manage, like all the time I spend only with the blog it’s really impressive. Don’t hesitate to visit some places, no doubt you will enjoy his art and maybe why not request him a day… ^^

One year ago: Pokemon – #354 Mega-Banette
Next to come: Happy birthday Haku