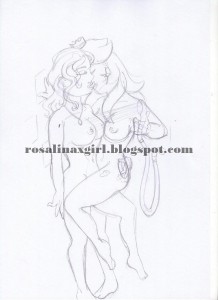 A little special publication because this drawing is a WIP but Merethide wasn’t happy with the result so this project is now abandoned… What a pity… But stopped or not there is Rosalina and I must show this pic, it’s better than let it die alone in my computer… ^^

Don’t think you remember Merethide but she drew the two first drawing publish here with Cynthia (here) and Rosetta Christopher (here). I meet Merethide in my “Restaurant City” facebook group where at start, I sent every day a little newsletter about the game. Merethide sent me a message because she’s not really a fan of the Mascot (Maggie) I use as avatar for the group and propose draw me an other… She create Ithais and after this, I became her N°1 fan… She have a pretty nice style but want to stop draw because she wanted to be a little more famous and now haven’t a lot of time to draw…. That’s so bad… T_T

Other reason I really want to show this pic, it’s the other character named Jade, her red hair OC and her gold dragon… So here you don’t see the dragon but there is some nices pics about this character in her DEviantart gallery, don”t hesitate to take a look…