#909 – Sexiest waitress of the galaxy

So WordPress updated and now for every external link it add rel=”noopener noreferrer” on the html code, just increase the size for nothing and the plugins existing to remove it don’t works… Bwaaaa… T_T
Technically “Noopener” is to secure from a fishing method named “tabnagging” and block the JavaScript command “window.opener” (I’m pretty much lost as you). The second “Noreferrer” hides referrer information when the link is clicked, could be problematic when you have a partnership or affiliating program.
If ya curious, during my researches I also leaned about a 3rd tag named “nofollow” essentially to tells Google robot not to pass and check those links, it can be use to administrative page or sites where reputation or credibility may be an issue. I wonder if can be use to external links that have chance be dead with time, I need make deep researches about this °o°

Now let’s go for less serious and more kinky stuff with a new illustration made by Mazzacho that never stopped work for the project since the last illustration I posted so there is sore more to come from him. We we decided about this commission the original theme was food porn and I was surprised to discover that Mazzacho and me didn’t see that term on the same way. My side I was more expecting something messy with cream, syrup and maybe some fruits or vegetables then for Mazzacho it was more about the waitress/hooter universe, artistic freedom as part of your deal it sure was the artist idea that wont and considering the result there is nothing to be disappointed… Oh yeah… \(^o^)/
How don’t like this arousing but adorable waitress Rosalina pleasant to watch from every part? And adorable face looking at you, perfect breasts you would like to grab, perfect curved magnified by this latex dress (Mazzacho manage texture so nicely), a cute ass getting even more teasing on the alternative version and even the plate with food and drink adding a dynamic touch but that can hardly fight Rosalina perfect looks. I know from another project that booty is a really popular fetish (that seems to even beat feet one) but Mazzacho really managed a hard work that everything looks so perfect so what you guys like the most in this piece? 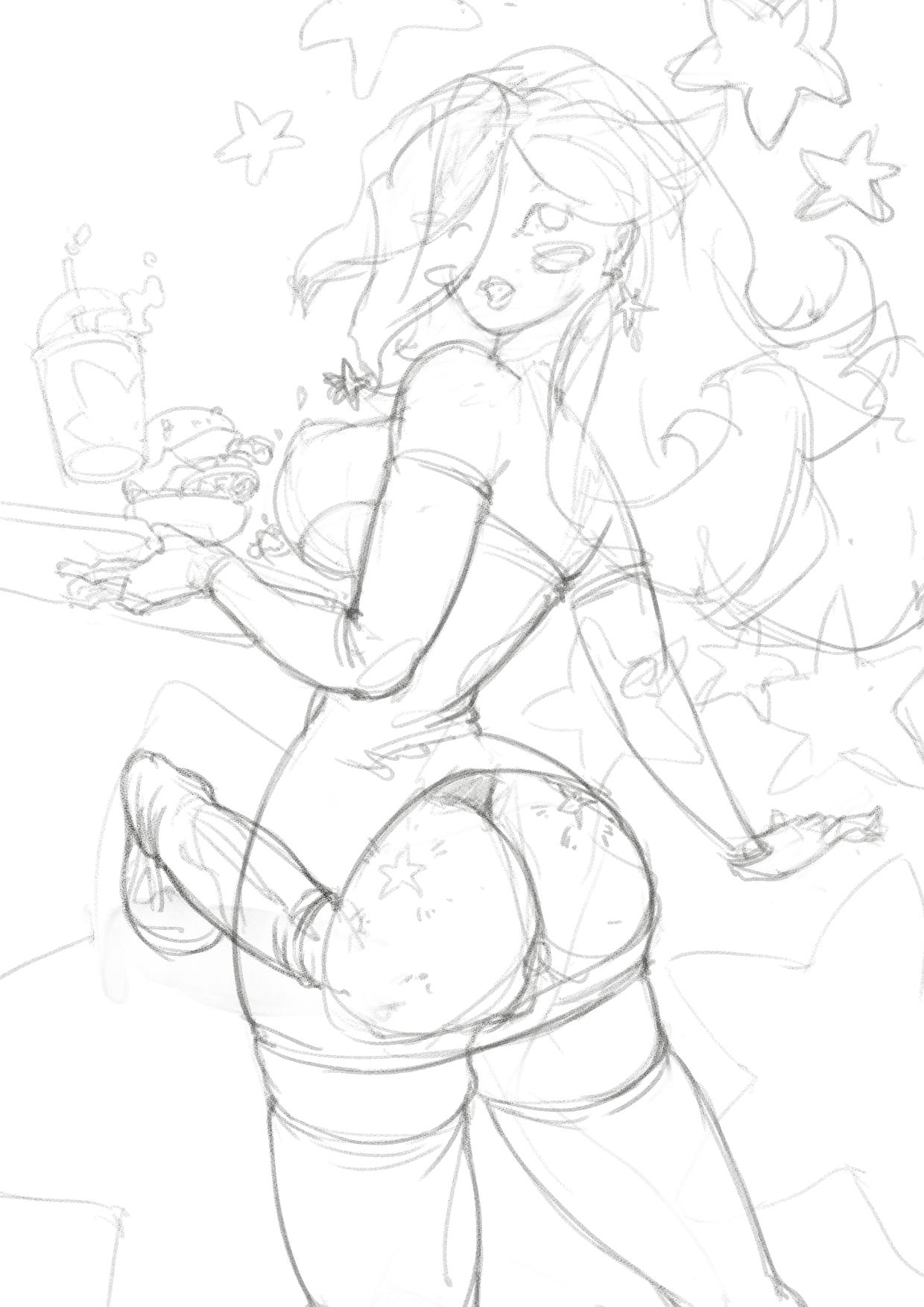 As you can see, for the final version Mazzacho made a sexy version with bra and panties then a second more kinky with Rosalina topless and a butplug visible with the pantie removed as bonus, I love how Rosalina face keep looking so pretty and adorable giving both version a powerfull mix between cuteness and sexiness. Now it’s time for a little secret about the creation process; while working on the illustration Mazzacho considered a futanari version with cum filled condom that you can see on the left, some tasty sauce ready to serve or you can even as the waitress give you a fresh one as icing on your desert enjoying the action and sweet moaning (thinking about it I personally love how sounds this scene). °w°
As you can see an illustration can get some ideas and details appearing during it’s creation but that wont appear on the final version for some reasons so being curious there is always fun and interesting things to discover like the futa option on this illustration by Mazzacho. So really if you have a chance then don’t hesitate to go watch and support artists like Mazzacho while streaming to spend time with the artist, discover about his techniques and even get secret about the illustrations that only you will know… So much power and fun packed at same time, isn’t that a power even bigger than Thanos one? XD