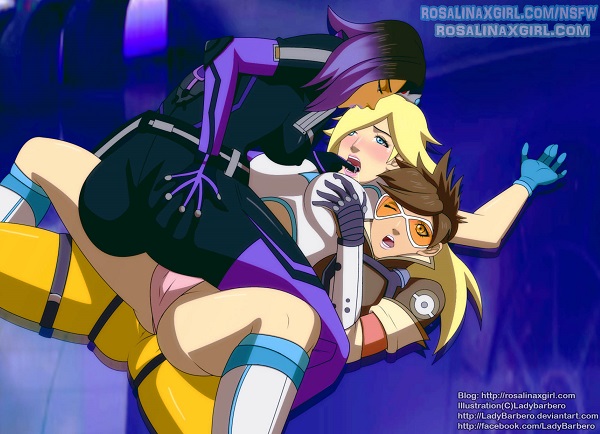 From the new site version, there is an edit you can see on the post with now a previous/next banner on top and a part in bottom about comment and next post coming. Both aren’t visible in the main site as if I consider add the previous/next banner, anyway for comments, next to come and one year ago there is not enough publications on this side to consider it usefull.
I also had to cut le link between soft and nsfw website to get adsense allowed again, google ads aren’t allowed on websites with adult content but give way more than juicyads without need pop-up so back with google… °w°

And after a huge wave of safe and sweet posts to add content I needed for the sfw website, naughty illustrations are back with a naughty trio by LadyBarbero. I already got a lot of female characters from that series but had to continue fill the list so Rosalina now enjoy some time with Tracer and Sombra From Overwatch, I still have Pharah, Widowmaker, Anna and Moira so far to be completed, anyway LadyBarbero helped me fill the list with two more ladies and you can see all Rosalina x Overwatch illustrations here.
I agree according to the character origines and stories, it’s a weird to see Tracer and Sombra together but adding Rosalina then LadyBarbero sure made something crazy. Anyway nothing impossible and with some imagination there is so many way Rosalina can come to this situation, maybe she just appeared in a middle or a battle or tried to help for the peace (seems it kinda worked). I wonder what could be LadyBarbero idea to explain this scene but on the artistic side no doubt she did an awesome job… Oh yeah… \(^o^)/
I’m sure seeing this illustration a lot wonder about alternative piece and unfortunately there is no naked version of this illustration from LadyBarbero, even as exclusive art for this month. Honestly it already looks gorgeous that way with some tight and sexy clothes, after all Tracer and Sombra are way more sexy with their outfits than naked in my opinion. As for Rosalina it’s LadyBarbero that imagined her outfit offering a great view and curves, a bit curious there in no pant but some panties is also really exciting, even more from that point of view… °w°
There is another trio from LadyBarbero coming in the future, you must keep an eye on her deviantart cause she often offer special commissions pack that are fucking cheap. As you can see you can go to commission her hentai but LadyBarbero is open to various style with commissions so feel free to ask in a comment or note instead of leave with a doubt… ^__^