There was too much silents days lately and I’m thankful to all of you that came asking for news and see if everything fine. At last I’m not dead (yeah) and don’t know if can call this a hiatus since the reason is totally a lack of time. I’m now running a cosplay project and each one are enough to keep me fully busy so trying to get a balancing was not easy as I expected. Now after like a year working hard on the cosplay project I got it’s not getting back the energy level that this one does. I also get a week off due to covid (low activity at work) so can prepare some stuff.

I’m still getting a huge Rosalina addict and getting art of her so don’t worry about the content, also I’m going commission Mazzacho several sketches to help him financially then got an idea. All patreon members on the page can request an illustration up to two characters, whatever your tier, anyway it’s a 1 hour sketch session (+10/15mn) on each illustration so the more complex it is the most details get lost. Choose wisely :p

Many illustrations by Mazzacho started with the inspiration coming from a post on Twitter or instagram and this time even being from a photo I sent him the result is the same. It was photo of sexy cow model sitting on a huge milk churn and when Mazzacho managed to stream the next day there was a cow Rosalina sitting on milk churn (not a coincidence for sure). You can see about the original photo on the left if you are curious, the model being trap I was a bit worries that he can dislike the photo since not everybody is into trap/trans but never expected that he could like it enough to get inspiration for his next illustration… With Rosalina… \(^o^)/

After hours of stream and breaking the finish line several times (so if you took the time read to this point you now know where the title comes from), Mazzacho decided it was time to stop here with the illustration entering an “unlimited polishing process“ at this point. There’s some drawings that make you think can always be improved adding more details or shading options ad finally you can spend so much hours on minor editing without be able end with that feeling so it’s important to be able to stop on it and be able move new thing. Be sure it’s more easy to say than to do especially for Mazzacho being a perfectionist and can easily spend hours trying to make his drawings perfect. Anyway as many artists he have ton of projects but not unlimited time so it’s important to push him to stop to rest a little before get his perfectionism habit back ^^ 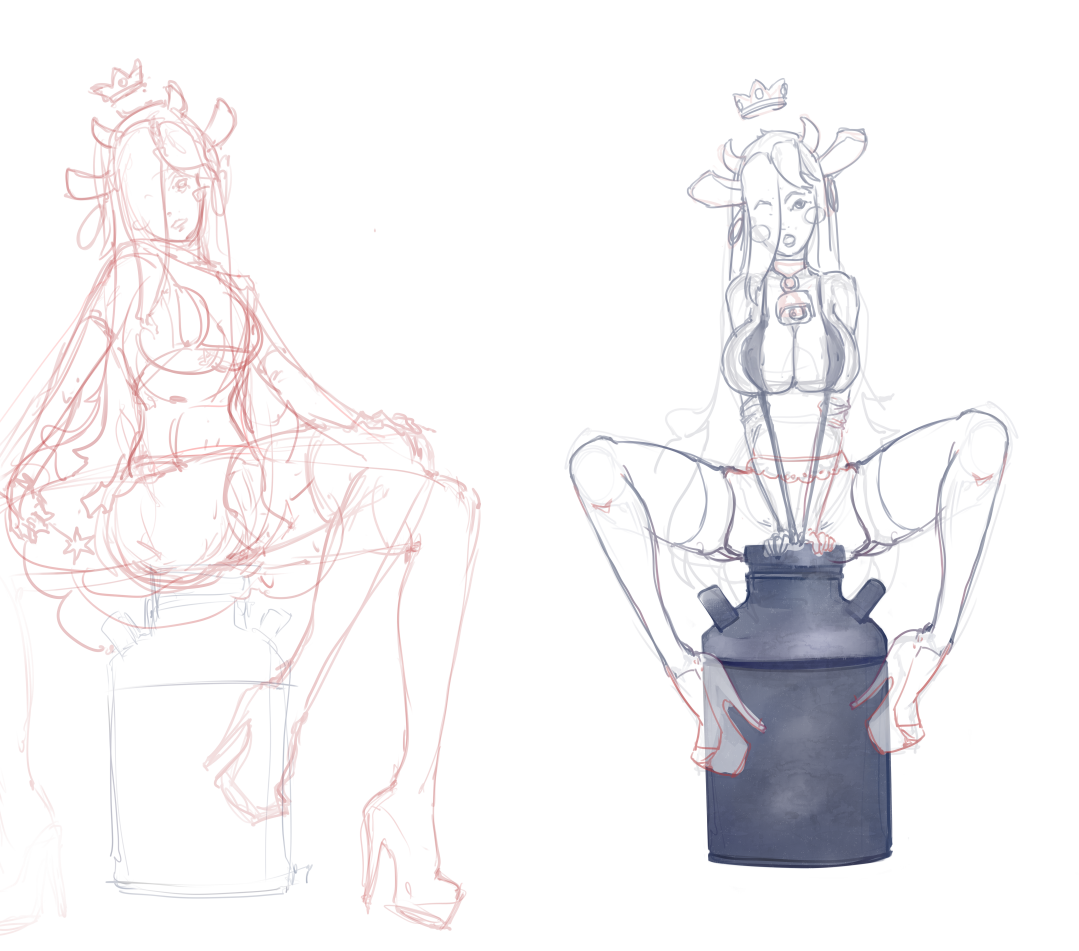 Also sometimes the extra details you add to illustration don’t come with the result you expected, as example with this illustration Mazzacho added cows inside the barn before finally say “I think it better without cows“. I agree with that statement and to be they add the strange feeling to the environment, of course it’s interesting and realistic but when you put a sexy girls stripping in the middle it can give some disturbing bestiality ideas, even more when your are into beast fetish and start imagine the cows coming around Rosalina liking her princess body and sensitive spots with their huge tongues (and I better stop here cause in my mind it’s just the beginning). Anyway I posted both version so you can see by yourself ^^