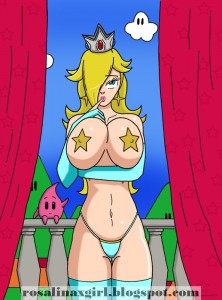 I had told you the next drawing will be sexy so I hope you like it… But it’s won’t be for a long time because for the next four publications I’ll publish my drawings from the comic festival, and there isn’t something really hot… But it’s four really diffrent styles so I’m sure there is one who will pick your interest… Oh yeah… XD

I’m really happy show you this drawing by daydream… I asked him since a ling time (it was in february) if he accept request and commission to draw Rosalina for my blog… No answer but daydream sent me a mail some day ago with this awesome pic saying ” Thanks for asking me to draw her I would’ve never thought to draw her. I will be drawing more of her, I wanted to give you a chance to update your webpage “

Maybe daydream it’sme who hate to say “thanks”… Thanks so much in fact… You drawing is awesome, soft but so beautifull and sexy… Like her face and expression, she’s really exciting, and if you add the fact she have awesome breasts, it’s just too much… Love this pic… You’re so nice daydream, thanks for your kindness and the awesome work you do for my blog… (^o^)/