I must admit preparing this post, find a great title gave me hard time, I wanted something both descriptive but also exciting but there was too much details that I had trouble to mix. Thanks to Kittehskye and Lunakiri for their help, I now the title looks like a pervert tag list, anyway I know I missed the futanari touch but… shhh! ^^’
About myself I really should get a notepad with me, always have so many things that come in my mind and would be interesting to tell then when come time to write the post there’s nothing… Raaah.. T_T 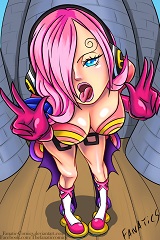