Patreon bonus: HD version of this illustration for all patrons

Here is the time that make you remember how family is important but also can be cruel with what happen to some people I know. I could say it must be wonderfull here but I know we have some family troubles that will come with serious adult talking but no way escape from this. Finally I guess the best isn’t just hope but manage yourself to make Christmas fun and spend a nice time… Oh yeah.. \(^o^)/
Also, this post was earlier prepared and planned so if you can read that sentence it mean I managed it correctly… ^^ 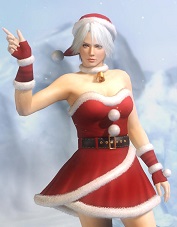 Here is a new illustration by Lunakiri who contributed the most this year with 9 illustrations (see them here) ex-aequo with Mazzacho who made 9 pieces too (see them here), I love both of them so much and and having ton of Rosalina art to post from those wonderfull artists and friends is damn powerfull… Oh yeah… \(^o^)/
This time get have a really naughty piece to celebrate Christmas as reward for December patreon raffle, I had this scene in mind but cannot decide the girl with Rosalina so I decided cheat a little and have patrons decide for me. It was already decided that Lunakiri will work on the illustration and it’s Tallon who said ‘the most dom one would be Christie‘ from Dead or Alive. A perfect choice since she’s one of my favourite lady from the series so everything was ready to have Lunakiri complete it and she finished two days before the deadline (congrat)… ^__^ 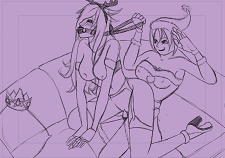 As if the idea was pretty clear from the beginning, there was some talking with Lunakiri to set details like if Rosalina suit had to be blue or brown and if gave her a ‘ball gag or bit gag would be more fitting for the equine riding look‘. Both were good question, as for the outfit I really wanted it brown to keep the reindeer look but hard choice between ball/bit gag. Finally as if I expected it on Rosalina wearing a full equine bondage suit, I asked Lunakiri to go with the bit gag being curious how it will look and the result is pretty good, maybe not the best angle to show one but make me want try this accessories again in the future… °w°
When I see this illustration, a part of me is sad put Rosalina into so naughty situation with hard fuck, bondage and spanking but on the other side I also feel so proud of the result, Lunakiri did a wonderfull job and the result is sooo hot. Everything look so cool as texture on pillow, folds on sofa and the crown design that Lunakiri always add her personal touch as some kind of signature. Rosalina is so dan sexy with that suit and I hope I’ll be able get that outfit again in the future in a pose and view that show it better, not fair Christmas season is too short… T_T

I received so many wip from Lunakiri and so powerfull see the evolution of the illustration and all the work Lunakiri put on each part also have to say the pose was edited to show heels as I requested. IF you are interested to get her work on your own idea, Lunakiri do SFW and NSFW commission that can also be animated as the one you can see on the left. Lately she practice animation a lot going more ambitions and talented don’t don’t miss it as long as she have so powerfull prices… Oh yeah… \(^o^)/